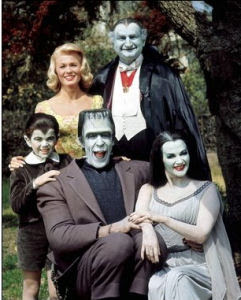 "Mockingbird Lane" showed the dark side of the 'Munsters' mythos, but that's not how it was in the original series. Except for maybe Marilyn, each of them was a benign representation of their monstrous origins.

Herman may have been a bit thick, but at least he didn't have the brain of "Abby Normal" knocking about in his noggin. He was reasonably intelligent and only suffered through tantrums more than rampages.

Being born a werewolf, Eddie had far greater control over his condition than someone who was later bitten by a werewolf - like Quentin Collins, Daniel Osbourne, and George Sands.

Lily and Grandpa may have been vampires, but we never saw them draining anyone of blood. (Grandpa trying to bite Lily in the opening credits was probably just a momentary lapse in discipline.) They probably "lived" like the vampire detective in 'Moonlight' and the vampire who worked at the blood bank in an episode of 'Tales From The Crypt'. They availed themselves of blood supply donations.

(I've written about Grandpa and his contradictory life last Halloween. Here's a rerun.)