"STAR TREK XI": NOT SO KEEN ON KEENSER 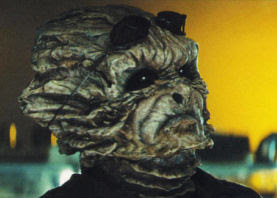 I had a problem with a particular element of the new "Star Trek" movie which I saw on vacation - that of the introduction of so many new alien life forms among the crew or at the Shipyards bar. Even with a reboot of the "Trek" timeline, where were these aliens in the original series? And why couldn't there have been more aliens from the original series?

We got an Orion girl - and I hope Gaila comes back (Huzzah!) - and the Vulcans and Romulans, of course. Plus there was mention of the Klingons.

I think most annoying was Keenser, Scotty's little buddy on Delta Vega (seen above). Online, "Miroslav" has suggested that he's a Jem'Hadar midget. Not an idea I like since it brings Gamma Quadrant into the "Trek" timeline way too soon. (The Jem'Hadar were introduced in 'Deep Space Nine', my favorite 'Trek' series, by the way.) 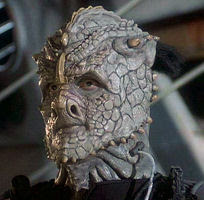 We're stuck with Keenser as is, so who knows? Maybe he is a midget Jem'Hadar who found his way through the Bajoran wormhole. (They do know of the Cardassians in the movie, as Uhura orders a Cardassian Sunrise at the bar.)

But if I had my space druthers, I'd have opted to design his look to be that of a midget Tellarite. Where would the harm be in that, save to the ego of the make-up effects designer who would probably make his mark by going boldly where none had gone before. (As far as action figure potential goes, the Powers That Be would have made money on him whether he looked like he does or was seen as a Tellarite.) 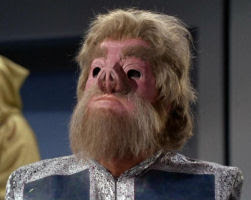 So reluctantly, I'm going with Keenser being the Jem'Hadar Munchkin.....

As the Federation changes and evolves, I'm sure there are several distinct worlds with distinct lifeforms that are not directly involved with the adventures we see on "Trek" shows and movies. Some races live quietly on their own planets. Others evidently work as assistants on remote outposts.

We don't see a lot of crew members from India, but that doesn't prove that they don't exist... and adding someone to the crew wouldn't be "inventing" a nationality.

Whenever Uhura opens hailing frequencies to get tech support, her calls are transferred to India.

keenser is a wonderful bit of whim, in such a fast action movie.
Comedy was the perfect touch.

Uhura is beautiful and smart. Nice to see one woman in the bridge crew. Should be half female to represent the sex, we hold up half the skies after all!