On July 4, 1776, the American Colonies became the United States and ever since then, the Fourth of July has been celebrated for that time when we kicked the British out.

But for the last ten years in Toobworld, we've been sneaking them back in......

I've never understood why American TV producers hire British actors for their TV series and then force those actors to do American accents.  With some of those characters, it's due to the demands of the characters' backstories - as with Mark Addy's Bill Miller, who had been in high school with his wife Judy (played by Jami Gertz.)  Why couldn't he have been an exchange student; or better yet, why not just hire some fat American comic actor to play the role?

It never went to series, but why did David Tennant have to be an American in "Rex Is Not Your Lawyer" except for the casting of Jane Curtin as his mother?  He'll be American again with his leading role in 'Gracepoint', Fox's unnecessary remake of 'Broadchurch'.  (I understand that one, in a way - they don't want the two characters to be confused with each other and they probably hope Tennant's 'Doctor Who' fanbase will carry over to the new series.)

Couldn't Lennie James have been a British military operative asssigned to an American unit in the alternate dimension where 'Jericho' can be found?

Why wasn't Chuck Bass originally from the West End of London instead of the East Side of New York?  He still could have emigrated to America wtih his family and gone to that school. (Perhaps Dad could have been assigned to the UN?)

Kevin McKidd as Dr. Owen Hunt on 'Grey's Anatomy' - wouldn't his natural Scottish brogue have been more interesting in the halls of Seattle Grace Hospital?  (And the same goes for his 'Journeyman' time-traveler Dan Vasser......)

Simon Baker is Australian, not British, but the same holds true for his Patrick Jane, 'The Mentalist'.  Had he been an Australian living in America and obsessed with the serial killer who murdered his wife and daughter, the only differences in the series storyline would have been to his backstory.  And even then his life on the carny circuit could have remained, with just a recasting of family members.

Another Aussie is Robert Taylor, playing Sheriff Walt 'Longmire'.  But in that case, I think I might give it a pass.  I don't think they could have found a leading man of a certain age in the States who was as rugged as the Wyoming back country and had that deep rumble of a voice......

'Fringe', 'Homeland', 'Revenge', and most ironic of all, 'The Americans', all have British/Australian actors in leading roles.  (And I only deal in Toobworld, so don't get me started on the same situation in the Cineverse!)

I'm not saying any of these British and Australian actors or any of the many others aren't up to snuff, especially with the accents.  (They seem to be popular casting choices when it comes to Southern roles.  Ryan Kwanten and Stephen Moyer of 'True Blood' come to mind.)  Nor am I advocating that they should be rebuffed in favor of American actors.  It's just that you go to the trouble of hiring an actor with a foreign accent, take full advantage of its unique sound!

Why am I on this rant?  I recently saw an episode of 'The Avengers' entitled "From Venus With Love" with Philip Locke guest starring as Dr. Primble.  And as I watched him, the gears in my televisiological mind kept trying to work out a theory of relateeveety between Primble and Greg 'House, M.D.' 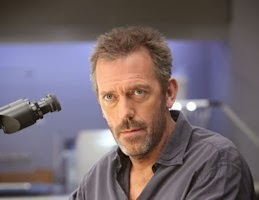 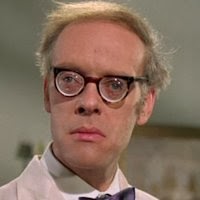 But of course, Hugh Laurie had to play House as an American, which included casting American actors as his parents.  But wouldn't it have been more interesting if he sported his British accent there in the wilds of New Jersey?  (I know - as if it wasn't enough to make him interesting by giving him a limp, a Vicodin addiction, and a misanthropic personality.)

I suppose if I went back enough generations it would be pozz'ble, just pozz'ble, to make the theory of relateeveety work for the Doctors House and Primble.  But you go far enough back and you can probably find a family connection between Don Draper and Ralph Kramden.  (I've already suggested that Draper - aka Dick Whitman - was descended from Cheyenne Bodie!)  Eventually we're all related to each other at some point down the line.

And I would feel compelled to find the missing links in that family tree - where did the House branch veer off from the Primble lineage?

And that would mean work.  And I'm lazy.

I suppose I could make the case that Primble is related to Dr. Paul Slippery of 'fortysomethng'......

I hope you have a happy Fourth of July, Mother-Bleepers!