AS SEEN ON TV: NAPOLEON BONAPARTE

We've featured Napoleon Bonaparte earlier in the year; but with the passing of Henry Gibson, perhaps it's time to give the diminutive French leader the "As Seen On TV" showcase once more...... 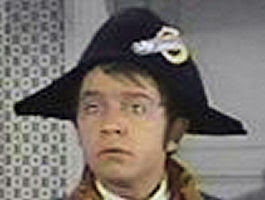 AS SEEN IN:
'Bewitched'

AS PLAYED BY:
Henry Gibson

Napoleon was summoned into the Stephens' kitchen by Uncle Arthur's attempt to make a French dessert with magic.

I'm not sure who would be the definitive Napoleon on Earth Prime-Time - definitely out of the running would be Verne Troyer's version in 'Jack Of All Trades' - but I think we can come up with a splainin to eliminate Gibson's portrayal from consideration.

At least one other historical figure was summoned into the "real world" by magic in that household, but not from any earlier point in History. Instead, George Washington was "zapped" out of a storybook that belonged to Tabitha. So it could be that when Arthur's spell went awry, Napoleon was brought forth from that same storybook.

(I'm sorry the picture's not clearer, but the source was so tiny that it lost a lot when I enlarged it....)