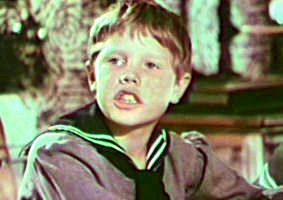 LOUIS LEONOWENS
AS SEEN IN:
"Anna And The King"

AS PLAYED BY:
Eric Shea

From Wikipedia:
Louis Thomas Gunnis Leonowens (25 October 1856 – 17 February 1919) was a Briton who served as an officer with the Siamese royal cavalry and founded the trading company that bears his name.

He was the son of Anna Leonowens of Anna and the King of Siam fame and Thomas Leon Owens, a civilian clerk, whom she married in India in 1849. He was born at Lynton near Port Gregory in Western Australia and went to Siam (now Thailand) with his mother in 1862].

He was raised in the Siamese royal palace and was schooled by his mother alongside the royal children until he returned to Europe to complete his education. In 1881, at the age of 27, he returned to Siam and was granted a commission of Captain in the Royal Cavalry by King Chulalongkorn.

In the TV version, his name is Louis Owens and he and his mother are American, not Welsh.

As there were a time when people used to spend their long time for movies as Now the technology has completely changed the meaning
of life as now everything can be enjoyed online.Fan group of TV Shows can watch TV Show Online with best quality of video and very high buffering speed.