AS SEEN ON TV: JACK LONDON 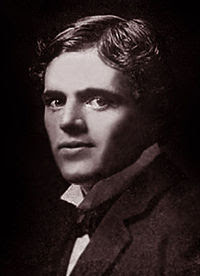 On this date in 1876, Jack London was born.
From Wikipedia:
Jack London (January 12, 1876 – November 22, 1916) was an American author who wrote The Call of the Wild, White Fang, and The Sea Wolf along with many other popular books. A pioneer in the then-burgeoning world of commercial magazine fiction, he was one of the first Americans to make a lucrative career exclusively from writing. 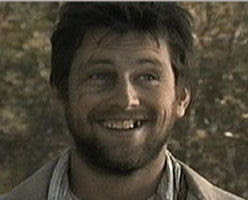 AS SEEN IN:
'Mentors'

AS PLAYED BY:
Chad Willett
Here's an episode guide description of his appearance in 'Mentors':
Oliver finds himself back in time due to a computer glitch. Meeting up with Jack London, Oliver experiences some harrowing moments in the untamed Klondike during the gold rush. When his 21st century wristwatch is stolen by an unscrupulous gambler, Oliver finds himself in a race against time to preserve history as we know it.

Since it's the Toobworld Central position that all of the "Mentors" encountered in this series were computer-generated, Oliver actually found himself in a computer simulation of that era. It could even be that his computer was somehow uplinked into a connection with the past timeline of the 'Harsh Realm'...... 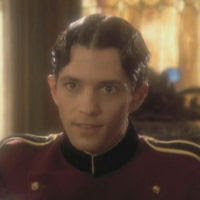 AS SEEN IN:
'Star Trek: The Next Generation'

AS PLAYED BY:
Michael Aron

From Memory Alpha:
Jack London was an American author in the late 19th century and early 20th century.
In 1893, he worked as a bellboy at the Hotel Brian in San Francisco. His earlier jobs included being an oyster pirate, selling newspapers and working in a fish factory. While working as a bellboy, he met Data who had been transported back in time. He helped Data, whom he believed to be an inventor, acquire things that he needed to build a device to detect temporal distortions to return to the 24th century. He also tried to talk Samuel Clemens into writing Jack's biography, but Clemens advised him to become a writer himself and to fulfill his dream of going to Alaska.

Click here for a clip from Chad Willett's reel of his scenes as Jack London in 'Mentors'...

And here's a few scenes from that two-part 'ST:TNG' episode "Time's Arrow" which not only features Jack London, but also a member of the TV Crossover Hall of Fame, Mark Twain!

All that talk about oysters and oyster pirates is making me hungry....