AS SEEN ON TV: GEORGES MELIES 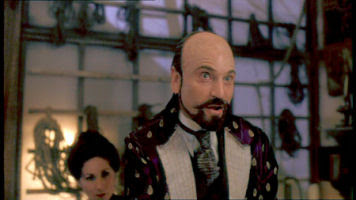 GEORGES MELIES
AS SEEN IN:
'From The Earth To The Moon'

AS PLAYED BY:
Tchéky Karyo 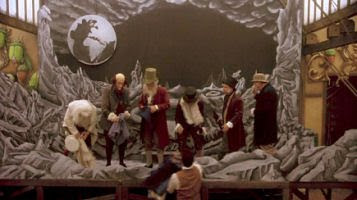 This week, "Le Voyage Dans La Lune" celebrated its 107th birthday. It's generally regarded as the oldest science fiction movie. And it was created by Georges Melies.

Georges Méliès (December 8, 1861 – January 21, 1938), full name Marie-Georges-Jean Méliès, was a French filmmaker famous for leading many technical and narrative developments in the earliest cinema. He was born in Paris, where his family manufactured shoes. 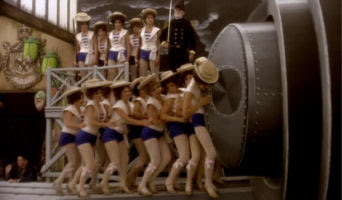 He was very innovative in the use of special effects. He accidentally discovered the stop trick, or substitution, in 1896, and was one of the first filmmakers to use multiple exposures, time-lapse photography, dissolves, and hand-painted color in his films. Because of his ability to seemingly manipulate and transform reality with the cinematography, Méliès is sometimes referred to as the "Cinemagician."
His most famous film is A Trip to the Moon (Le voyage dans la Lune) made in 1902, which includes the celebrated scene in which a spaceship hits the eye of the man in the moon. Also famous is The Impossible Voyage (Le voyage à travers l'impossible) from 1904. Both of these films are about strange voyages, somewhat in the style of Jules Verne. These are considered to be some of the most important early science fiction films, although their approach is closer to fantasy. 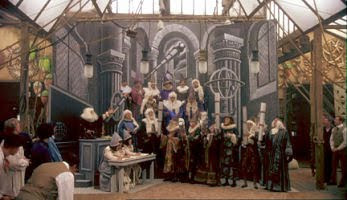 In addition, horror cinema can be traced back to Georges Méliès's Le Manoir du diable (1896).
[from Wikipedia]
Another leading character in that last chapter of the mini-series was Jean-Luc Despont, Melies' cameraman. Played by the series producer (and writer of this episode) Tom Hanks, Despont can only be found in Toobworld, so he wouldn't get his own listing in the "As Seen On TV" showcase. 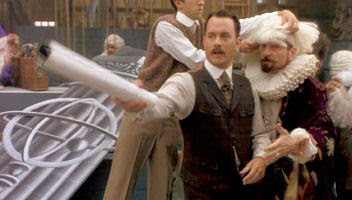 [My thanks to Jordan Hoffman for pointing out this milestone....]
Posted by Toby O'B at 3:59 AM