From Wikipedia:
Dame Daphne du Maurier, Lady Browning DBE (13 May 1907 – 19 April 1989) was an English author and playwright. Many of her works have been adapted into films, including the novels "Rebecca", which won the Best Picture Oscar in 1941, "Jamaica Inn", and her short stories "The Birds" and "Don't Look Now". The first three were directed by Alfred Hitchcock.

AS SEEN IN:
"Daphne"

AS PLAYED BY:
Geraldine Somerville

Press release:
Based on personal letters and biographies, the film charts the story of Ms. Du Maurier’s unrequited passion for the beautiful and glamorous American heiress, Ellen Doubleday and how the play she wrote about this forbidden desire, led her to a life-changing love affair with the irreverent, fun-loving actress Gertrude Lawrence after an introduction by Noel Coward in New York. 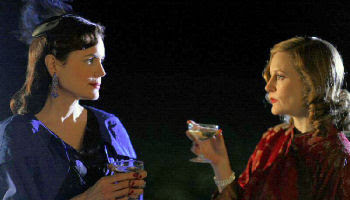 [with Elizabeth McGovern as Ellen Doubleday]

Many of Ms. Du Maurier's works have been adapted for television, with enough versions of "Rebecca" to populate 9 alternate TV dimensions.

These are the TV adaptations of her novels and short stories:

The Lifeforce Experiment (1994)
(story "The Breakthrough")